We Don’t Need No Water text & pictures of related works 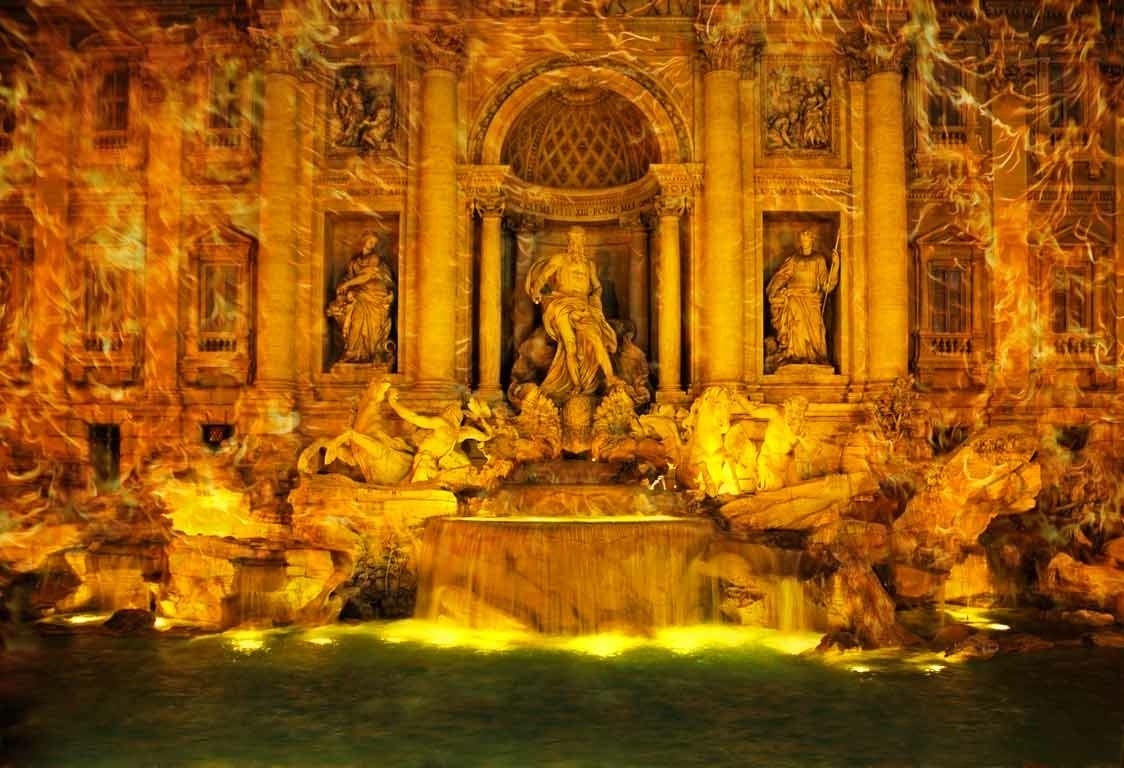 We take pride in our cultural institutions. They reassure us of the refinement of our civilization. Every little city of a certain size feels the need for a cultural institution. Along with a town hall and a church, a museum make things seem complete.

ls the essence of culture linked to other constructs than the buildings that house cultural products? Would there be no culture, if these cultural institutions were destroyed?

In Aarhus the destruction happens. The art museum is set on fire. More than 50,000 inhabitants of the city can watch from the windows of their homes as flames lick away the building, turning the popular ARoS Aarhus Art Museum, beloved by the citizens, into a glowing cube of silent, smokeless fire.

Art itself does it. Using huge projectors, to throw images of live burning flames on the museum, artists Pio Diaz and Thyra Hilden produce a museum wrapped in flames.

As visual artists, their gesture is neither aggressive nor destructive, they do not demolish what cannot be replaced. Their art is a symbolic inferno, their fire an illusion to seduce and make us wonder what the loss of such a cultural institution would be like. They are not simply playing with fire, they are also playing with your mind.

The burning begins on the first of the day a Danish newspaper published the Cartoons of the Prophet, which caused a series of boycotts, and saw demonstrations across the world. Muslims burned the national Danish flag as a symbol of their anger. Clever thinking! lf you attack my symbols, I will attack yours. Let us stick to a war on icons.

The sad fact is we do not. Denmark is still at war in foreign fields. What was long supposed to have been merely a peacekeeping force has turned into real combat for Danish soldiers in lraq. Whatever the motives, whoever is responsible – what happens to the cultures that are attacked in the name of culture and democracy? | hurt you to make things better, because I know what is best for you.

Fights and fires some times get out of control. Within moments values – in every sense of the word – can be destroyed forever. They say people with culture never go wrong, and it is true that the strong beauty of the past makes us proud and aware that we are at the end of a long evolution. We need to know our past to understand the present and learn from failures of the history of mankind. But some times the past feels like a heavy burden to carry. Culture and knowledge of the past can limit expressiveness in the present! Culture and cultural production bear an element of destruction. The pupil has to exceed the mentor and personalize tradition.

Some one hundred years ago a group of ltalian intellectuals formulated the idea of destroying the proud monuments of the past. They glorified industrialization and mechanization. They loved cars and planes for their speed and vitality. They believed man had proved himself to be in control of nature, and they saw destruction as artistic expression: tradition is nothing, the future is all. These artists had no patience. They were inspired by modern warfare and supposedly laid the foundation for the Fascism later accepted by the general ltalian public. The group goes under the name of the Futurists and counts Milanese painters like Boccioni, Carrá, Russolo, Balla and Severini among its numbers. In the Manifesto of Futurism(1) , the poet Filippo Tommaso Marinetti declared:

“We will fight with all our might the fanatical, senseless and snobbish religion of the past, a religion encouraged by the vicious existence of museums. We rebel against that spineless worshipping of old canvases, old statues and old bric-a-brac, against everything, which is filthy and worm-ridden and corroded by time. We consider the habitual contempt for everything which is young, new and burning with life to be unjust and even criminal.”

The Futurists had strong faith, justified cultural destruction and wanted all old things gone. Umberto Boccioni wrote the Manifesto of Futurist Painters in 1910 with these famous words:

“We will glorify war-the world’s only hygiene-militarism, patriotism, the destructive gesture of freedom-bringers, beautiful ideas worth dying for, and scorn for woman. We will destroy the museums, libraries, academies of every kind, will fight moralism, feminism, every opportunistic or utilitarian cowardice.”(2)

Boccioni would probably hail the fact that American soldiers in lraq today are provided with the song Fire Water Burn by Bloodhound Gang. lt goes: “The roof the roof the roof is on fire. We don’t need no water let the motherfucker burn. Burn motherfucker burn”(3). This is the sound track that excites combat groups to destruction. lt is easy to imagine how this song makes the adrenalin pump and produce a real life simulation of a computer game… Target in sight… Target locked … Target destroyed …

Myths of Creation do speak of destruction. You will have to tear down to build up, but destruction comes in different forms, it can be either nurture or attack. lt is not easy to decide when cutting back the rose, to remove the bad stops being pruning and becomes brutality. And when it comes to culture, who is to decide what are the weeds? Whatever the religion, it is still a question whether it is acceptable for Taliban warriors to destroy statues of Buddha in Afghanistan. Similar events have taken place around the world through all times. lt seems cultures act aggressively to develop and expand. ln the wake of the Cultural Revolution in China, great things disappeared, but later it was the statues of Mao that were taken down by the people. Paradigm shifts are often brutal to architectural monuments and other cultural icons. Just think of the artistic and literary treasures that were burned as Entartete Kunst by Nazis during WW2, let alone by Christians and other religious movements who feared the power of literature and culture and wanted to remove cultural products that did not fit into their ideological scheme. The images – the burning illusion – by Thyra Hilden and Pio Diaz bring to mind all these disruptive and aggressive cultural turns.

Destruction, in the form of a clean break with the past, can be collective as well as personal. The large scale collective destruction of the past, suggested by the Futurists, proves an awkward link to contemporary Feng Shui, which is a vulgarization from an Eastern philosophy about simple living, now promoted in lifestyle magazines telling us how to tidy up and take control over our lives. According to Feng Shui, we will find greater happiness and less friction if we throw away the things we do not need and tidy our homes and workspaces.

There is something very tempting about this idea. We have all at some point tried to start from afresh, or have deeply wished for it to happen, while actually repeating the same limited patterns. Minimalist Art also speaks of the Tabula Rasa, the idea of escaping the past and having a virgin white canvas for thinking and acting, the quintessence being Robert Rauschenberg’s Erased Dekooning from 1953(4). One artist making a statement by carefully erasing the art of another famous artist.

Could you write off material life and destroy your most cherished belongings – or all your belongings? Artist Michael Landy did(5). In, Oxford Street, London’s busiest shopping street, he organized a thorough destruction of all his belonging. Small things like clothes, records, books, and porcelain were easy, but there was also a car and all the furniture, plus art work by himself and those given to him by fellow artists. Nothing was spared. Artworks by Damien Hirst, Tracey Emin and the like were all crushed into tiny chips. The art project looked like a factory with workers spending several days intensively crushing things in a special rig. The project wished to question consumerism.

City on Fire, and the burning of ARoS Aarhus Art Museum, by Thyra Hilden and Pio Diaz
celebrate all these issues about the power of cultural heritage and the beauty of destruction. Their statement is a subtle intervention but proves to have a powerful impact. Would it make life easier if you had no past, no belongings? Would we have no culture if all cultural institutions were gone? Close you eyes and watch the flames. Watch it burn down to the ground. Now, how does that make you feel …

1. First released in Milan where the movement was based and later published on the front of the French paper Le Figaro, February 20th, 1 909.
2. Article 9 and 10 in Manifesto of Futurism by F. T. Marinetti, 1909. In ltalian: ‘Noi vogliamo glorificare la guerra – sola igene del mondo – il militarismo, il patriottismo, il gesto distruttore. Noi vogliamo distruggere i musei, le biblioteche, le accademie d’ogni specie e combattere contro il moralismo, il femminismo e contro ogni viltir opportunistica o utilitaria”.
3. In the film Fahrenheit 9/1 1 it came out that American soldiers in lraq are supplied with music samples of heavy rock and the like to listen to.
4. Robert Rauschenberg’s Erased Dekooning is part of the MoMA collection, NYC
5. The project Breakdown by Michael Landy came about in the spring of 2001 with support from Artangel.