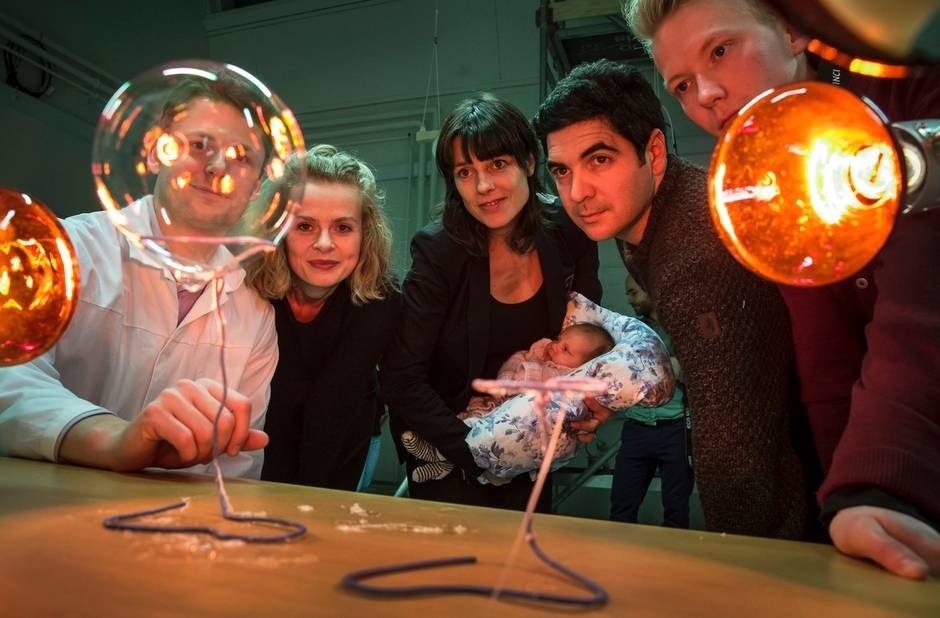 In a brief moment, your idea can appear complete and tangible.Then you start to concretize the idea, attempting to word it or build it, but this very act of realization will inevitably distort it.

We wish to freeze that very moment, in which an idea appears complete and tangible in all its simplicity.Bubble embodies this very wish of freezing the brief moment. A moment is such a short and abstract period in time, and because it lacks the substance to be defined, a moment is fragile.

The act of freezing the moment is then for us related to preserving the fragile.

And what is more fragile than a bubble?A bubble is a thin film of water floating in the air.
Its visual appearance is a transparent and light form covered with fluctuating colors that never quite settle. Only defined by a tenuous membrane, the bubble is easily broken, and often, it lasts only for a few seconds before it bursts and disappears.

Bubble will be a bubble that will float freely in space. It is set to create the friction between the anxious expectation that it may burst any second, as bubbles usually do, and the realization that it will not.In freezing the moment, Bubble thus embodies the potential of capturing the dream of the idea, complete and tangible.And it lasts.

29/05/11 21:07 Project introduction: Bubble, 2011
For many years it has been of interest for us to question the structures of society through destructive forces such as fire. This year, our interest has shifted to its radical pole, that is, how to construct something as fragile as possible, and to make it last. This interest has now developed into being our new art project named Bubble.

Bubble is a site-specific installation presenting a free-floating bubble of around 2 – 5 meters in diameter, which will be hanging in the air above the spectators, displaying a pattern of fluctuating rainbow colours known from regular soap bubbles.

Bubble is based on the production of a large soap bubble that is modified to last, potentially eternally. The construction is made possible through collaboration with professors from the Department of Physics and Nanotechnology, at Aalborg University. For the project, we have created a strengthened molecular binding in the bubble membrane to ensure that it will not burst.

Bubble needs certain installation conditions, to ensure that it will stay a float and not vaporize, humidity levels, air circulation and temperature stability. This conditions are provided by Hilden & Diaz to be installed when exhibiting Bubble. We are now working on improving the molecular binding to make the bubble less dependent on these environment factors, and hence to ensure that it can be installed under already existing exhibition spaces. We expect these improvements realized at the end of 2011.

A bubble is a form with many references, be it from childhood memories of playing with the soap bubble to art historical symbols such as vanitas. For us, however, it is the potential of the frozen moment when the bubble is not bursting, that captures our interest the most.