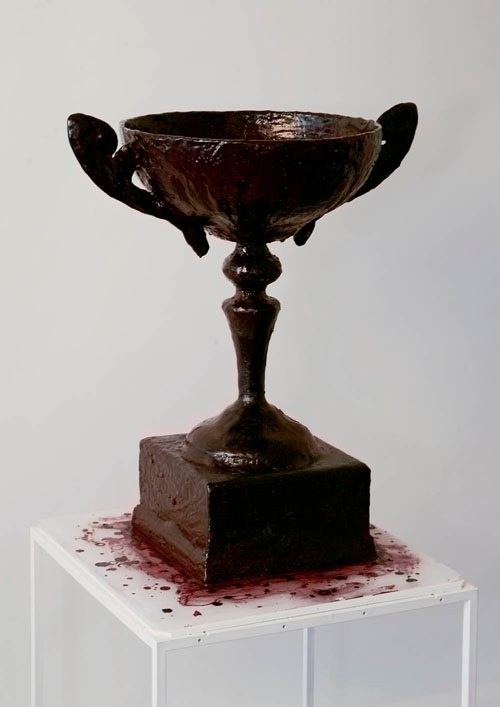 Pure blood text by Vivian Kathrine Nagy
Due to bloods importance in life, it is symbolically loaded. Therefore the moving of blood between bodies can be seen as more than a surgical innovation because blood is strongly symbolically charged and connected with identity and affiliation. This means that blood, as a vital fluid, gives powerful, cultural, ethic and religious associations. This symbolical dimension of blood is often linked to the terms; blood bonds, blue blood and good or bad blood.

One of the main metaphors that are connected to blood is its symbol as a bond between people. In terms of these blood bonds, you can distinguish between two levels: on one hand there is a direct biological bond between people with the same blood type that has an influence on whether they can give and receive blood from one another. On the other hand, you can talk about blood as a more “invisible” bond linking individuals and groups, parents and children, tribes, clans and races together.

Blood today
From being a mythical substance, blood is today more and more seen as a biological organ that transports nutrients around the body. However despite this demystification of blood during the last centuries and focus on its vital function in the body, blood still has a coherent symbolical significance, which makes it one of the most powerful and ubiquitous symbols. Blood signifies life and death, health and disease, power and powerless. The perspective on blood is thus not fixed and it mystical aura remains. One of the strongest influence on how blood is regarded today is, whether it is placed inside our outside the body:

Besides the increasingly status of blood as a commodity in our society today, it is still symbolical loaded. Through dissections down to its organic functions and last details and finally through industrialization, blood has lost its mythical and religious significance during the last centuries. Blood has become a global trading product and to give blood is a human resource in favour of the community.

Blood and Art
Since the 1960s the body has been more and more a subject in art. Generations of action painters and early performance artists confronted the audiences with inflicting injuries upon themselves and several European artists have used animal or human blood in violent actions focusing on the body. Amongst the most famous are the group of Viennese Actionists who were known for their happenings through which the aim was to remove the dividing line between art and life. With references to Dadaistic and surrealistic art, the Viennese Actionists posed questions that challenged the definition of art and deliberately went beyond bounds of what was considered acceptable at that time. Through a focus on the body and self-mutilation the artists draw attention on repressive mechanisms in society. One of the artist for whom blood plays an important role is the Viennese Actionist Hermann Nitsch. He worked with animal blood that he used to pour over his models and over himself and he threw and splashed blood from a sacrificed lamb on models. In these performances lays references to the early religious rituals and also to the Crucifixion of Christ.

The 1970s performances also revolved around body aspects. Michel Journiac made his “Mass for a body” which consisted of a pudding-shaped body made by his own blood, which he offered to the viewers. The sacrifice of human blood in an artistic process echoed the Christ’s sacrifice for the humankind and expressed the artist’s willingness to experience pain as a form of self-expression. Journiac’s work is also interesting, since he makes an object out of his own blood that is connected to him as a subject.

Another example of turning blood into a physical object is the sculpture “Self” made in 1991 by Marc Quinn who created a sculpture by collecting his own blood over five month. Using about five litres, the amount of blood, which is in an average humans body, the artist formed a frozen copy of his own head that is now store in a glass box at -70c. The sculpture is a self-portrait, which contains all the artists data: his facial features, his blood type and his genetic material. In this way the artist creates a memento mori of him self and something for the afterlife to remember him by. In the work he is symbolically present in the shape of his head even if he in reality is absent.