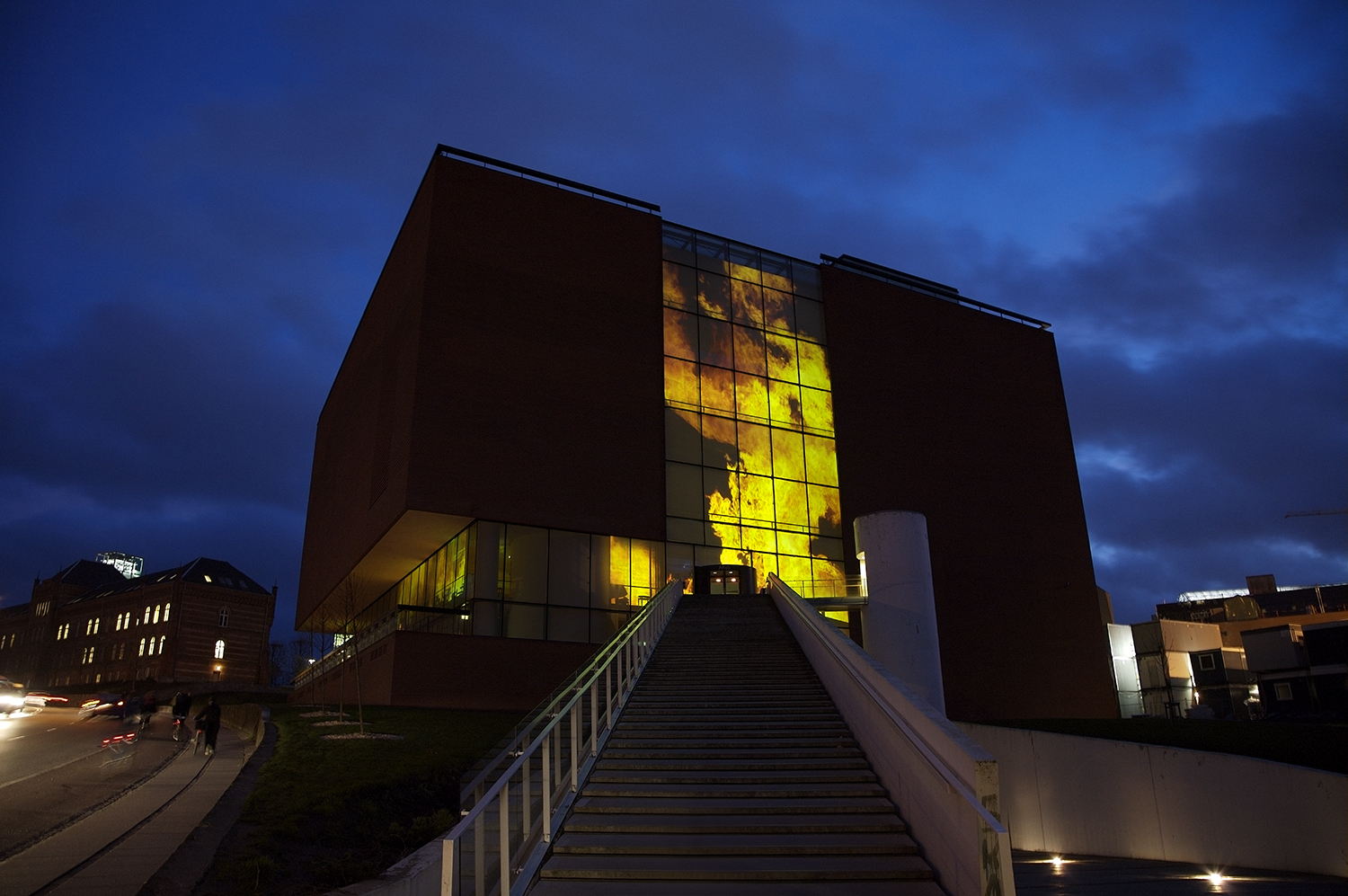 Burning the Roots of Western Culture
The Illusion of Fire In the first month of the New Year a rare work of art can be experienced in ARoS Museum of Art in Århus, the biggest museum in Scandinavia. It appears in the darkness of the evening like a violent arson attack on the successful museum at the top of a hill in the centre of the city.

It is the Danish-Argentinean artist couple, Thyra Hilden & Pio Diaz who figuratively speaking set fire to AroS with their video project ‘City on Fire’. With this seductive and spectacular gesture they point to the fragility and temporary character of the building, thereby helping to contribute to destabilising the familiar picture of the city of Århus.
An art museum like AroS contains both older and more recent works of art, which constitute a key to our culture and thus to our self-understanding as Danes and Europeans. When the museum is figuratively speaking devoured by the flames, equal parts of angst and delight are released in the public. For the illusion has such a convincing effect, and our instinctive reaction to the fire is so firmly rooted in us that we try to ward off the danger when we see the precious building go up in flames – even though we know that this is only a transient piece of work that is limited in time and unable to cause any real damage. With fire as the metaphor, the artists would like to make visible the latent, destructive, imperialist force that has emanated from Western culture over the ages – from its very earliest times. The art museum contains large amounts of works documenting this kind of violence. The press is always very preoccupied with the destructiveness emanating from other cultures, but we have to keep in mind the fact that the whole of Western culture is founded on destruction and vandalism. In this, fire has played a significant part as a weapon during assaults seeking to conquer others.

A new concept of art The project confronts the art institution at the same time as being a new way of creating art. Art with a more direct address. It is challenging when, for instance, the glass-framed works within the walls of ARoS are placed under a magic spell in a sea of flames. The project takes up about 1000 square metres when projected on the ARoS windows. Some 50,000 people will be able to see the flames from their homes. As the flames lick up the outer walls, the traditional approach to this category of work and the framework in which it is normally exhibited is distorted in that it is the exterior of the museum and not the interior that forms the background to the artistic manifestation. ARoS takes on the shape of a sculpture: the fire exploits the spaciousness of the building and creates an installation at the same time as the work of art confronts and examines the surrounding world. Thus, the work ARoS on Fire becomes a metaphorical expression for the destruction of the traditional concept of art. In this sense, the fire forms a platform for a process of purgation, after which art is reborn in an expanded field and arises anew – like the Phoenix from the ashes.