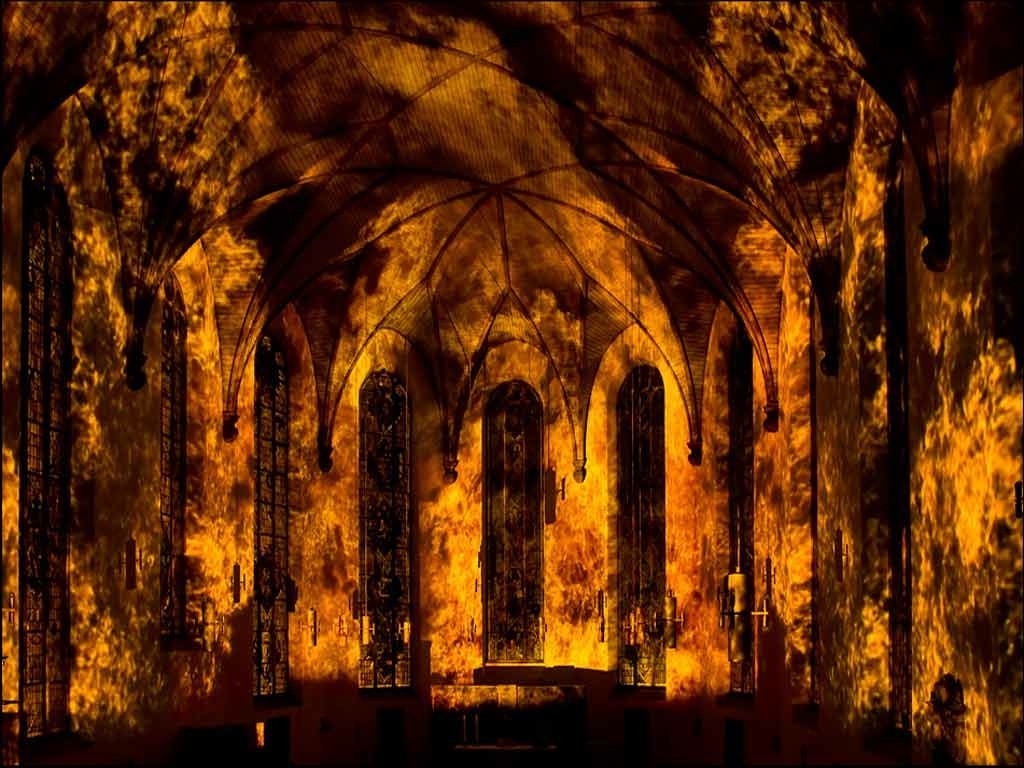 Sankt Katharinenkirche im feuer
The artwork ’Kirche im Feuer’ by the visual artists Hilden & Diaz (Copenhagen) has been selected as one of the highligts during LUMINALE, Biennale LichtKultur in Frankfurt. The burning church by Hilden & Diaz is one among many huge installations performed by Bill Viola, James Turrell, Olafur Eliasson and other contemporary artists working with light.

This is the challenge of the latest fire performance of Thyra Hilden & Pio Diaz from Copenhagen. The space created in the holy church of St. Catherine in Frankfurt enhances its sacredness to become a true hierotopic space and a most fascinating topic indeed for the study of hierotopy,[1] concerned with phenomena of creation of sacred spaces in ancient and contemporary ritual performances. Fire in the holy church is a powerful symbol – it sends to the sacred rite of fire in the Christian church at Easter time, known as To Hagion Phôs in Greek, that is, the Holy Light – which is God in His utmost presence, yet not in essence, but manifested in His uncreated and unconsumed energies – never to be extinguished. Hilden & Diaz performance of fire is about this mystical and liturgical re-enactment, but the origins of their image brings to the fore in the most conspicuous way the hidden power of the latest and most sophisticated technological invention of the 21st century – the plasma, which is also fire, but in its cold, paradoxical, instantiation. The mystery of the holy fire of Jerusalem (To Hagion Phôs sta Ierosolyma), performed each year without failure for the last 2000 years, is described as a strange visual phenomenon, a lighting manifestation as if not of this world – a fire which does not burn. In this paradox – “the fire which does not burn” – God meets the new media – the plasma – the incandescent yet cold matter, which carries the unknown and the unfamiliar, the sublime that makes one think of the metaphysics of the new media often evoked.

The power of video plasma – in our case of video fire – is far from being completely unveiled, which makes this performance invaluable. Its seductive appearance stirs up fear as well as compelling fascination. Above all, it has the power to animate such powerful paradigms like the holy fire, which makes it a kind of theosis (deification) of the new millennium. But in fire, destruction and hope for redemption blend each other; fire is indeed a double symbol with apocalyptical flavour.

Nobody, perhaps, like Goethe from Frankfurt, has more graciously given voice to this ambivalent power of fire: to the glowing holy Light, as well as to the destructive fire of Mephistopheles. The ambiguous discourse of fire receives a strong resonance in the church of Katharinenkirche, where Goethe himself – the genius of Enlightenment – has perhaps waved out his scientific dream of light, as well as his poetical vision of the Salamander, the legendary fiery creature, voiced by Faust: “Salamander shall kindle, Writhe nymph of the wave, In the air sylph shall dwindle, And kobold shall slave…. Vanish in the fiery flow. Undine! Shimmer in the meteor’s glam, Sylphide!… … I’ll sting you with fire that’s holy! Don’t wait for the bright Triple glowing Light!” (Goethe, Faust, part 1)

The plasma video performance of the Danish artists Thyra Hilden and Pio Diaz makes us aware of the power of the new media to give new substance to the old myth and to bring past and present together in a glow of fire – a paradigm of imagination that we all share and to which we constantly return. Thyra and Pio’s vision is the return to the vision of the hermetic fire, our original home, as well as to the vision on Mount Tabor at St. Catherine in Sinai, re-enacted again and again, now at Frankfurt in Katharinenkirche an der Hauptwache. “Cold and untouched amid these sacred fires” – as the poet (Edward Young, Night Thoughts) might say – the mysterious presence coming out from this video performance fascinates. It is impossible to remain unmoved by this fiery vision: the dance of the Salamander un-warmed in the fire.

Nicoletta Isar Associate professor, Copenhagen University Denmark Copenhagen, 24 March 2008 Sankt im feuer Sankt Katharinenkirche Fire burn [1] Hierotopy, the study of sacred space (from the Greek hieros = sacred, and topos = space), is an international network founded by the Russian scholar Alexei Lidov, in which I have recently investigated the contemporary hierotopy of such artists like Bill Viola and Antero Alli.